The Winds of Revolution by Mark Conte 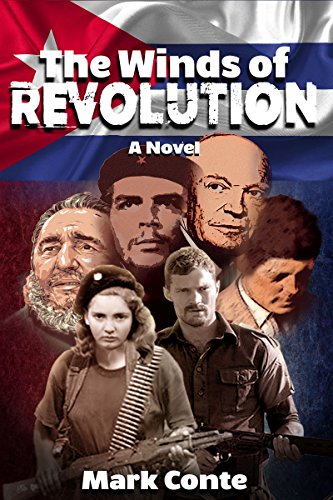 The Winds of Revolution at Amazon

The haunting love story of a young American sailor who falls in love with a girl battling Batista’s evil regime in pre-revolutionary Cuba, this is a fascinatingly accurate snapshot of time and place that will both intrigue and move the reader.

The author has drawn on his own experience of pre-revolution Cuba to set history straight, weaving together fact and fiction. Telling the story of a young American sailor’s ill-starred passionate love for an older woman fighting in Castro’s revolutionary army, historical figures are introduced to paint a graphic picture of the mood of the times and the harsh reality of prevailing living conditions, against which the people of Cuba so valiantly rebelled. The tragedy and the triumph are masterfully set forth, leaving the question as to why the rest of the world so disastrously misunderstood the events that led an entire people to reject the cruelty and abject poverty imposed upon them by a heartless dictator and to wholeheartedly support perhaps the one man who could have united them and saved Cuba for its people.
Fidel Castro’s moving speech at his trial under the repressive Batista regime is a graphic testament to a troubled time, but has been largely ignored in the U.S. Included in the fascinating factual section at the back, it makes this book a very important documentary piece, which coupled with the poignant love story at its heart deserves to be read by discerning readers everywhere.

Having visited Cuba for mission work in the past, I was very interested in reading this story about pre-revolutionary Cuba. I found the Cuban people to be a warm and extremely friendly group, but I also picked up how difficult life is for them. Downright scary at times. Those of us who live in the States can’t imagine how hard life is for a majority of the people there.

Mark Conte has managed to work a little magic by blending reality with fiction in this story. I picked up some of the Cuba I learned about firsthand told through the eyes of a young sailor who falls in love with an older Cuban woman. There is definitely a love story being told here, but also so much more.

The writing is well edited and easy to follow, told in such a way that I felt like I was right there with the characters. I admire the author for not only giving us a realistic view of Cuba and her wonderful people, but also a realistic look back at history. Kudos.

I think there is something to be found in The Winds of Revolution for every reader, whether you are interested in romance or a just a peek at a piece of history. I definitely recommend it and will look forward to more by Mark Conte.