The Devil’s Lieutenant by Shervin Jamali 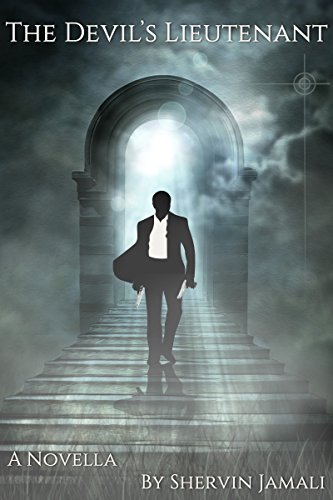 Amazon Link to The Devil’s Lieutenant

In the blink of an eye, Michael loses his family. As his life spirals out of control with grief, he is presented with the possibility that their souls might be trapped in Hell. Michael is a good man, a moral man, forced to do terrible things.

Thus begins an unimaginable and nightmarish journey to rescue his family from the depths of Hell, with the Devil as the puppet master pulling his strings.

The Devil’s Lieutenant is a fast-paced story that managed to hold my interest enough to read in one sitting. It’s about a man who loses his wife and son to a terrible accident and then falls into deep despair, basically trying to drink himself to death. One night Lucifer shows up to inform Michael his family is suffering in hell and he needs Michael to perform a task for him if he wants any hope of rescuing them.

The plot description caught my interest right away as I was curious what type of task Lucifer could have for a man. I did groan a bit at the start with the abrupt changes in the time line. This continues throughout the story and though I’m not sure I cared for it, I did eventually settle in. What Lucifer asks of Michael was interesting and unique. I can’t say I’ve ever read anything quite like it, so kudos to the author for coming up with something original. In today’s world, this is extremely difficult.

I do feel the characters and the story needed to be fleshed out a little more. Though it’s a novella, I personally think it would have worked better as a full novel. I wanted to get inside the character’s head better, feel his pain for myself instead of sitting on the outside looking in. I received hints of awesome with his portrayal of the devil character, but it could have been so much more. The action scenes were interesting. I’m usually groaning because the pace is too slow and I end up skimming, but here, except for one scene with the KKK, I actually craved more detail. It’s hard to explain what I mean without giving anything away. You’ll have to read it for yourself. From the other reviews, most readers were extremely happy with the character development and pace, so I have to assume I’m in the minority here.

I do recommend readers give this story a look. It’s a good, fast-paced read at a more than reasonable price of .99. I think the author is talented and I’ll look forward to reading more by him.

Posted by Denna Holm on September 7, 2017 in Archives.