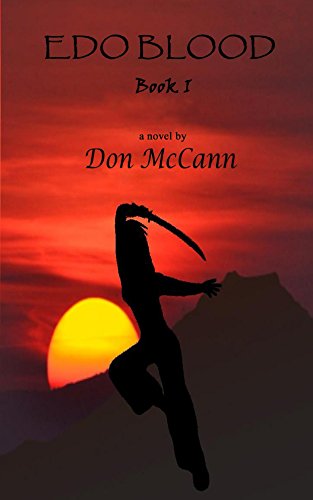 When a present-day student, on a field trip to Kagoshima, Japan, found an ancient scroll in an abandoned monastery, he unlocked a dark secret that had lain hidden for over 1400 years. As he followed what turned out to be a trail of scrolls all across Japan and China and back, he was shocked to find himself reading about a 16th century feudal lord named Mitsui Hamada—a woman!

Except there were no female feudal lords in 16th century Japan.

Mitsui’s dark history began with a vow of vengeance, then faded into a sweet promise of love. But that promise was torn asunder as that love was ripped from her grasp in one horrific moment. Plunged headlong back into her nightmare of revenge, her enemy’s destruction was the only thing that would satisfy her. At that moment, she embarked on a twisted journey which sent her fleeing her homeland in pursuit of ancient knowledge. At the end of Mitsui’s bloody journey waited an enemy more dangerous and powerful than she could ever imagine.

But, none of this was Mitsui’s secret.

Mitsui’s darkest secret—only told in the scrolls—was that she was a vampire. But, in this tale of blood and vengeance, Mitsui’s was not the only secret . . .

Wow! That about sums up my feelings about this novel. I had a real love-hate relationship going on while reading Edo Blood and actually fought with myself a bit over the stars afterward. I was almost ready to give it four stars, but then the truth is, I couldn’t put this story down, finding it completely captivating. Anything that gives me that kind of rush, the “I’ve got to finish this” deserves nothing less than five stars. So now I’ll get down to the review itself.

At the start of this story, Mitsui is a very young girl in 16th Century Japan, a male oriented society. Her father (a Samurai warrior) is a bully, who ends up raising another bully in Mitsui’s brother. But her brother attacks the wrong boy at school one day, one younger than him, and he is defeated, his father left humiliated. Shamed, their father sends his son to a monastery and then begins to devote his time to training his young daughter. He doesn’t do this because he loves her. He does it because he doesn’t have another son to train. Mitsui puts all the blame for what happened to her family on the shoulders of the boy who defeated her brother, not aware of the circumstances that initiated it. She is determined to train hard and become a strong enough warrior herself one day to kill this boy, vengeance all that matters to her.

Kenji is the young boy who defeated Mitsui’s older brother, but he doesn’t have any idea what happened to Mitsui’s brother or that she grows up hating him. Kenji is a smart young man devoted to his training. He eventually ends up being in charge of the Daimyo’s personal guard, a great honor for a young man.

The story mainly alternates between Kenji and Mitsui, both of them living separate lives, though we know they will eventually come together at some future point. Then we have the vampire element added in, which is completely different from any other type of vampire story I’ve ever read. I’ve held a lifelong fascination with vampires, be they the evil kind, the good kind, or even the sparkly types. Doesn’t matter, I like them all. But this story is unique, a little evil and a little something I can’t quite figure out. What I do know is that once I started reading, I had a tough time trying to put this book down, and it’s one of those rare stories that stays with you long after you finish it. I have a feeling most readers are going to be just as spellbound. Such a wonderful, realistic view of Japan. I can’t give it high enough praise.

So, why the conflict with stars? The author has a way of getting the reader straight inside the character’s head, a talent I wish more authors had. It allows us to experience it firsthand right along with the characters we’re following. Unfortunately, there are a few places where we go off on little side stories, such as with the father of Mitsui. It’s all wonderfully written, but it took me away from the two characters I wanted to know better, Kenji and Mitsui. As a standalone book I would probably have preferred these scenes to be cut. But, because this is a series, I’m assuming these extra bits of information will probably be needed for future books. Regardless, the story is awesome, with vivid descriptions that I swear takes us right to Japan and the era involved.

Am I going to buy the next one? You bet, can’t wait. If you like vampire stories, I’m willing to bet you’ll like this one too. If you like martial arts, you’re going to love this, vampires or not. The same if you enjoy the history of Japan and Samurai warriors. I feel the author either has firsthand experience living in Japan, or he did a bang up job studying Japan’s history before he put pen to paper. Either way, kudos, I’m impressed.