THE DOOM MURDERS by Brian O’Hare 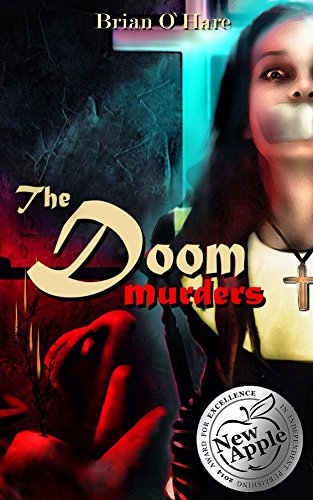 Prominent figures in Belfast are being murdered. The bodies are left naked and posed in grotesquely distorted shapes. No clues are left at the forensically immaculate crime scenes except odd theatrical props and some random numbers and letters concealed at each scene by the killer. How are the victims linked? What is the connection between these killings, the bible, and a famous medieval painting of The Last Judgement?

The Doom Murders has been the recipient of three literary awards – The IDB Award in 2014; The New Apple Award, 2014, for Excellence in Independent Publishing; and the 2015 Readers’ Favorite International Book Awards (Bronze Medal Winner).

“The Chief Inspector, Jim Sheehan, is drawn so deftly and with such genuineness, you can feel him breathing.” (Eugene Fournier, novelist and screenwriter, film and TV)

“The most subtle of clues are intricately interwoven into the story line, and even the most astute mystery buff is apt to miss them.” (Donna Cummins, Author of the Blacklick Valley Mystery Series)

“O’Hare leans toward the human side of his characters, imbuing them with a real world presence that is in turn witty and passionate.” (Roy.T James, for Readers’ Favorite)

I love mystery novels like this one even though I’m terrible at figuring out the clues given along the way. Authors like O’Hare make us think like a real detective as we follow along with the characters in the story. I have to admit that I didn’t connect the title with any sort of religious element, but it does hold a prominent place in the story. Important figures in Belfast are being murdered, the bodies left naked and posed in grotesque shapes. The scenes are forensically immaculate. Chief Inspector Sheehan and his team must figure out how these victims are linked, what is the connection between the killings, the Bible and the medieval painting The Last Judgement?

The character building was excellent here. I felt I had a real look into the minds of these people as they struggled through a difficult case, especially Sheehan. I noticed a few reviewers compared this piece to the Da Vinci Code by Dan Brown, but personally I thought this was much better. I couldn’t get through Brown’s novel, but had no problem here. It held my interest from start to finish. The scenes are also well described, brought to life in my mind. I like to picture myself there when I’m reading, much like playing a movie in my mind. If I’m not given enough from the author, it makes for a boring and dull story. That wasn’t a problem here.

Points I didn’t like so much. Okay, point. A tad slow to start, though I’d admit the beginning to most novels can be a bit hard to get into.  We need time and patience to get to know these characters and be given an idea of where the plot is taking us. I don’t dock points for a slow start. My stars are judged on how I feel after the first few chapters, whether or not I want to keep reading. Not a problem with this one. The Doom Murders held my interest from start to finish, and the end took me completely by surprise. I admit I’m not the brightest bulb in the pack when it comes to guessing murder mystery, but I’m willing to bet there are few out there who will guess this one.

And I’m not telling you. You’ll have to go out and buy your own copy if you want to learn.  Can’t wait to pick up my next novel by Brian O’Hare.