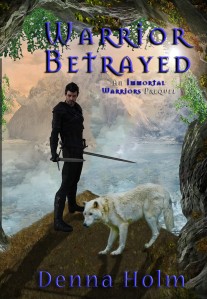 Calem is a wolf shapeshifter from the planet Laizahlia, a loyal pack member willing to do whatever his king and elders ask of him … until the day his daughter Abriel is born. There is a legend among his kind about a pure white wolf, a female born with bright blue eyes. She is called the Ghost Warrior, and it is believed she will bring about the destruction of their people.

Throughout their history, only a few of these white females have ever been born and all were killed by their own pack shortly after birth. Calem’s daughter is born with pure white hair and bright blue eyes. The pack grows nervous as she enters adolescence, demanding Calem hand her over to them. With nowhere safe to take Abriel, Calem and his mate will have to fight to the death to protect her.

Calem laughed as he watched his mate and daughter play beneath the falls at Umi Creek. It had been a particularly rough winter in the mountains, bitterly cold, the snow deep, and they were all in need of a break.

Basking under the warmth of the late spring sun, Calem stretched out on the grassy bank of the creek, the back of his head resting against linked hands. Rarely did he get to take time off from his duties as an elder for his pack. With nearly a thousand people under their care, the chores were never-ending: hunting parties to oversee, gardens to be planted, bows to be restrung, hides to scrape, knives to sharpen, the elderly and young to take care of. His older brother, Tylor, had all but pushed him out that morning, telling him to enjoy a few days with his family. Even though Calem had questioned the sadness in his brother’s eyes, he didn’t argue, looking forward to spending time alone with Sarya and Abriel.

Sarya, his mate of almost twenty years, waved for him to join them. He knew they planned to push through the falls to the cave hidden behind. Abriel loved to play with the briva, tiny rodents that made their home there, their nests hidden amongst the multi-colored crystals. Calem only grinned and shook his head. It might be warm out, but he knew the water would be icy-cold, the creek fed from snow melt off the higher elevations. Sarya and Abriel would both be shivering when they finally rejoined him in the sun.

Taking a deep breath, he thanked the creator for the blessings of such a loving family. He’d met Sarya while tracking a rogue for the Hunter, Gabriel—a tracker’s life not something he’d ever missed. Hunting down their own kind, killing them when given no other choice, had weighed heavily on his mind. Abriel arrived almost eight years later. Even though their king had forced him to move his family to the outskirts of the pack after Abriel’s birth, they’d been happy together, the best years of his long life.

Superstitious idiots, he thought. Abriel had been born with thick, snow-white hair, a trait that carried over when she shifted to her wolf form, a trait most definitely frowned upon by most of those in his pack. Frowned upon by most shapeshifters of their world. It would have been better if she’d been born albino, which happened on occasion, but Abriel had bright blue eyes, not red, her skin as dark brown as his own.

It had been easier to protect Abriel from their pack’s hostile glares and gossiping when she’d still been a young pup, but it grew harder as she got older. Though Calem kept moving his family farther and farther away from the main population, as his daughter entered adolescence, it grew impossible to hide their hostility from her. Everyone knew the legend of the Ghost Warrior. Everyone feared it.

Eventually, Calem knew he might have to move his family to another part of Laizahlia, but where? None of the other packs would accept Abriel any more than his own had. They all feared the legend about the white wolf. Their only other option would be to move into one of the vampire cities, and Sarya wouldn’t care for this. She feared most of the vampires, Gabriel the only exception. Sarya hated the idea of being forced to feed one, and it would be expected if they moved to the city.

He closed his eyes and tried to put his worries behind him, at least for the next few days.

When Sarya first screamed, Calem didn’t react, thinking his mate and daughter were just playing in the cold water. But when she screamed again, he heard the panic in her voice and leapt to his feet, running to the edge of the creek.

Sarya and Abriel had swum away from the falls and were wading in the shallows a few hundred feet downstream. He assumed they’d meant to catch trout for their dinner tonight. When he reached them, Calem didn’t hesitate to jump in the water, not bothering to remove his knee-high leather boots first.

“What’s wrong?” he asked, taking in Abriel’s glassy-eyed stare. Sarya stood a couple feet away, her hand over her mouth, fear in her eyes. “Sarya, talk to me!” He started to reach out for Abriel.

“No!” Sarya cried, stumbling toward him. “Don’t touch her, Calem. Abriel said not to touch her.”

“What?” he said, confused. Why shouldn’t we touch her?”

“She said we need to move out of the water. That it wasn’t safe for you and me here.”

“Yes. We were having fun at the falls, exploring the cave behind it. Then we decided to move down here to try to catch dinner. Abriel was fine one minute, and then she just froze. Like you see her now. When I asked what was wrong, she said ‘nothing is wrong.’ She said ‘the Umi have arrived early. They need to make a connection with me.’”

A chill raced down his spine. He had never personally spoken of the Umi in front of Abriel, but it didn’t mean others in his pack hadn’t. “Are you sure she said Umi?” They were at Umi Creek. Maybe it meant nothing, though deep down inside, Calem suspected it did.

“I’m sure, Calem. We shouldn’t have come here. Why did we choose this spot?”

But he knew. Abriel had chosen the spot. She’d asked him to take them to the falls.

No, no, no, no, no, he thought. It can’t be true. The Umi were nothing more than a story, a legend made up by some of their ancestors. But another voice whispered insidiously in his mind. If it’s just a story, why is everyone in the pack afraid of Abriel? Why do I fear for her?

Taking a deep breath, Calem shook off Sarya’s hand and took a step closer to his daughter. He shivered again when he glanced down, noticing something silver building around her bare toes.

“Abriel,” he said softly. “Can you look at me, Ona. I need to know what’s happening here.”

For a few long seconds, he thought she meant to ignore him, but then she slowly turned her eyes up to meet his and smiled. “It’ll be okay, Father. I knew this would happen when I asked you to bring me here. I don’t mean to scare you, and neither do the Umi. They need me. They need us both.”

“Knew what would happen, baby?” he whispered, wanting so badly to reach out and pull his only daughter against him, to carry her in his arms to safety. Knowing deep down inside that it would be a mistake, he fought his instincts and took a step back. “What do the Umi want from you, Ona?”

“I’m the chosen one. The spirit of their queen needs to be placed inside me, but I’m too young yet. They fear our people will try to kill me before I can mature, like they’ve killed all the previous vessels, so they’ve decided to send help.”

“Some of them are going to sacrifice themselves to join with me. They won’t have the strength or knowledge of their queen, but I’ll be stronger than I would be without them. Do you understand, Father? The Umi are going to try to help you and Mother keep me alive.”

“What’s going to happen when they join with you?” Would his daughter still be Abriel? Would she be the young girl he’d raised and loved for almost twelve years, or would she be something altogether different? Changed.

Isn’t that what their people feared?

Were they right to fear this?

“Don’t be afraid, Father. I’m not. Once they have established a connection with me, they’ll bridge another connection to you and Mother through me. All will be made clear then. If I can survive the next five or six years, the Umi queen will become a part of me. We’ll be safe then. All of us.”

Calem glanced down when Sarya grabbed his arm, motioning toward Abriel’s feet. He shivered when he saw the silver had climbed her legs almost to the knees. “Is the silver substance Umi?” he asked.

“Yes. You need to take Mother out of the water now. It’s not safe for either of you while the Umi are gathered together.”

He swallowed again, lifting his hand toward his daughter. “Please don’t do this,” he said, not knowing if the Umi could understand him. “I’ll take Abriel higher into the mountains. I’ll protect her from our people.”

“You can’t,” Abriel whispered back. “Our people fear the Ghost Warrior. They always kill the vessel before she can mature. This is the only way we’ll have any hope.”

The vessel? he thought, feeling as if he might vomit. My Ona is not a vessel.

“Go, Father. Take Mother out of the water. I’ll join you again soon.”